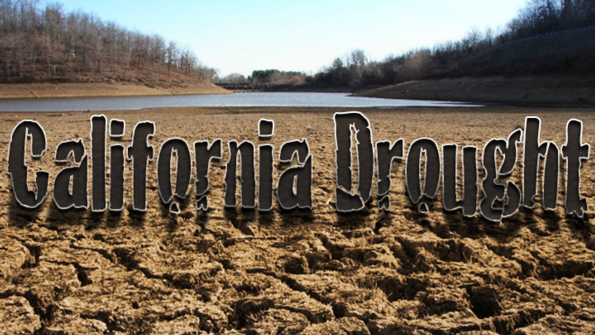 A dry riverbed in California.
National Oceanic and Atmospheric Administration

After just a few months, 2014 already has seen a number of record-breaking climactic events across the United States. Perhaps the most enduring climate emergency is the ongoing drought in California. In the midst of the state’s driest period in recorded history, on January 14, Governor Jerry Brown declared a state of emergency, outlining a series of steps and guidelines to manage the ongoing water shortage crisis. [1] By early February, several state and national agencies were collaborating to “minimize [the drought’s] social, economic and environmental impacts. [2] 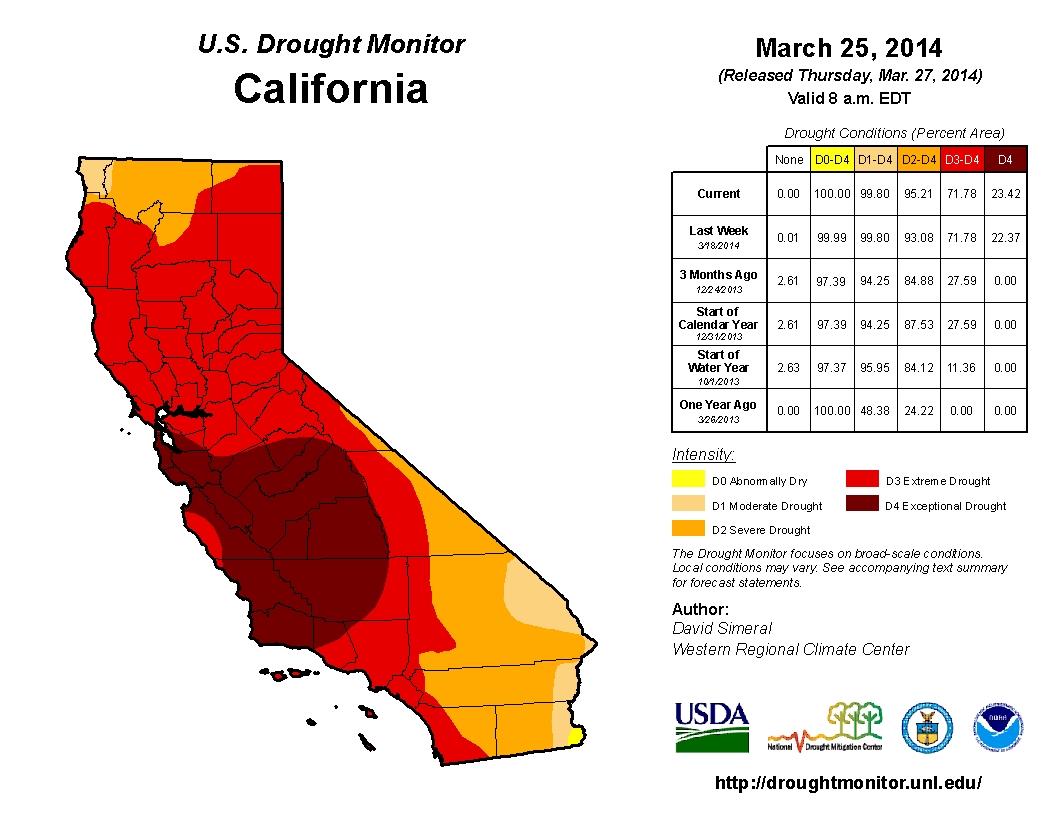 Heavy rains in February 2014—severe enough to cause dangerous flooding in places—helped to alleviate the drought, but not nearly enough to end serious long-term deficits in California’s water supply. [3, 4] As indicated in the map in Slide 1, by March 11, 2014, the entire state remained at least “abnormally dry,” and 91% of California was experiencing at least “severe drought.” Ironically, only the extreme southeast portion of the state, in the Sonoran Desert, has avoided the worst drought conditions.

California is not the only state affected by an exceptional lack of rain. As of March 25, 2014, much of the western US, including Colorado, Nevada, New Mexico, Oklahoma and Texas, were experiencing extreme or exceptional drought. However, no other state has been so drought-stricken, or for so long. After years of very dry conditions, California has a water supply emergency that impacts the availability and cost of drinking water supplies, irrigation, crop production, livestock and more. [5-7] And since California is one of the nation’s most important food producers, the impacts reach far beyond state borders.

Why are we seeing such extreme drought, and what are the effects? Climate change plays a primary role. The overall warming of our planet is causing shifts in precipitation and long-term weather patterns that can increase droughts’ length, frequency and intensity. [8-10] As a result, some regions are receiving—and will continue to receive—more rain than usual, while drought-stricken states like California likely will experience continued record low rainfall totals. In the Southwestern US, these events will have wide-ranging impacts related to crop production, human health, native flora and fauna, and the economy. Slide 2 highlights some of the key concerns identified by the US Environmental Protection Agency (EPA).

Scientists are not able to predict exactly when the current California drought will end, but eventually, it is expected that temporary weather conditions, such as those produced by El Niño, will provide some relief. El Niño is a weather condition characterized by unusually warm equatorial Pacific Ocean temperatures. The warm ocean waters cause increased rainfall in the southwestern United States and Peru. [11] In the long-term, though, the EPA and other organizations project that climate change will prevail, and that current dry conditions in California will continue to be the “rule” rather than the “exception.” [12] National governments around the world, and state/local governments in the US already are taking steps to prepare for the impacts of shifting conditions.

BioEd Online makes it easy to engage students in explorations of the science of global climate change and to build their understanding of how it could impact them.

Use our peer-reviewed classroom lessons, extensions and related content (e.g., videos, slide presentations, Nature News articles) to cover this important topic thoroughly, in a way that best meets the needs and interests of your students.