Japanese Earthquake and Tsunamis: Before and After

In the months following disasters, such as the March 11, 2011 Japanese earthquake and tsunamis, recovery planners are challenged to allocate recovery resources in the most effective ways. To determine where the need is the greatest, planners require accurate information about the extent and location of the damage.

Airplanes and helicopters can capture detailed images. However, to be useful, these images must be pieced together and matched to scale, and even sunlight angle. In such cases, satellite images are preferable, because capture wide regions at one time.

Remote sensing satellites, like NASA's Aqua and Terra orbital platforms, carry a range of instruments that digitally capture visible and infrared light. Computer processing enhances the images and brings out details that might be lost in natural color photos. For example, in satellite images, water can be darkened to deep blue or even black to enhance its contrast with the land. Forest green is shifted to bright red, while agricultural plots shown in pinkish hue. Urban areas are enhanced to light gray or silver. Clouds and snow appear white and smoke appears hazy gray or blackish, depending upon its density. If desired, satellite images also can be processed to simulate natural colors.

Immediately following the Japanese earthquake, satellite images of the region were captured and computer-processed. By comparing these images to those taken before the disaster, recovery planners can obtain the most accurate views of the damage and develop the most effective recovery strategies. 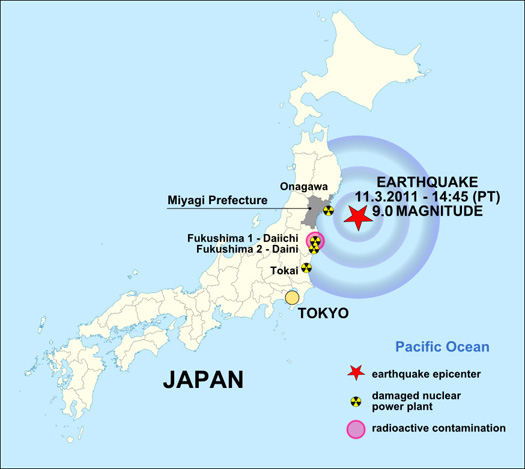 On March 11, 2011, a 9.0 magnitude earthquake struck northeastern Japan. In addition to the destruction caused by the earthquake and aftershocks, related tsunamis devastated miles of the Japanese coastline. Several nuclear power plants were damaged, leading to potentially serious health risks for tens of thousands of people.
source 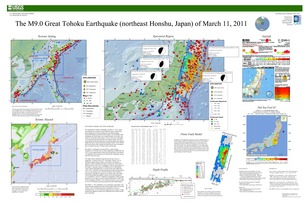