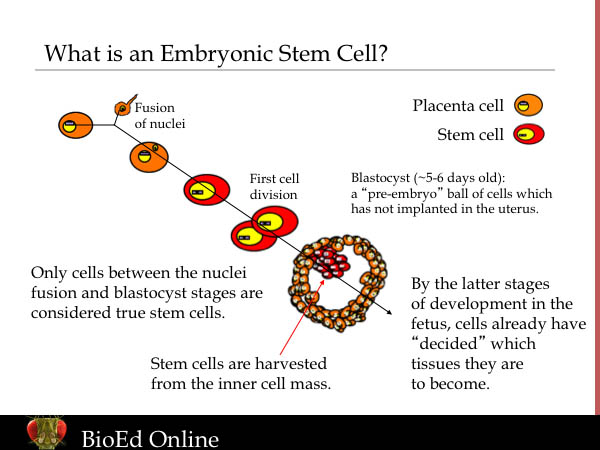 What is An Embryonic Stem Cell?

Embryogenesis is the process by which a single cell, formed from the union of the nuclei from a sperm and an egg, produces a complete organism. The fertilized egg is said to be totipotent, meaning that it has the potential to generate all the specialized cells and tissues of the body, as well as the tissues necessary for its (the egg's) development in the uterus.

The DNA within the fertilized egg instructs the cell to divide (usually 24-36 hours after fertilization). The cell divides into two cells, and then each cell divides again, producing four cells. This process continues for five to six days. At that point, the single cell has become a hollow ball of cells, called a blastocyst, that has not attached to the uterus. All mammals produce a blastocyst during embryogenesis. The blastocyst is composed of two distinct cell types: 1) cells that will become the placenta; and 2) the inner cell mass. The inner mass of cells (in red) is stem cells. These unique cells are described as pluripotent, since they retain the ability to read all information contained in the DNA within their nuclei and the capacity to generate cells from all three primary germ layers (mesoderm, ectoderm, and endoderm). In other words, they can produce the cell types corresponding to all of the tissues in the body.

A very specific event occurs after 5-6 days: the blastocyst changes very subtly and the cells in the inner cell mass lose their ability to read all of their DNA. In other words, cells are no longer pluripotent after this point in development.