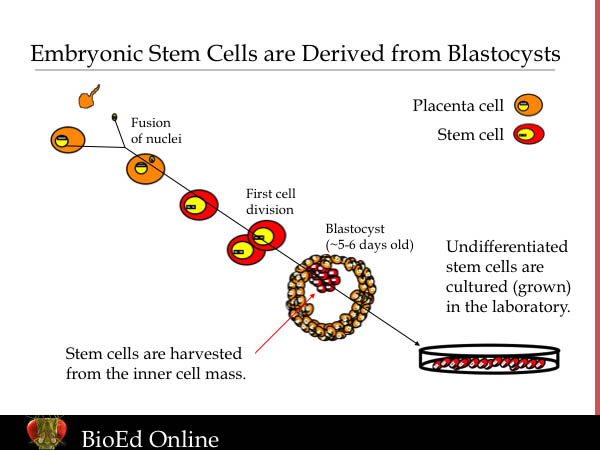 Stem Cells Are Derived from Blastocysts

Scientists can remove the inner cell mass of a blastocyst by microsurgery or immunosurgery (use of antibodies). The harvested cells are transferred to a petri dish containing a specialized nutrient broth, known as a culture medium. After 9-15 days, when clumps of cells have formed, cells from the periphery are separated and plated in the same type of culture medium. Not all cells of the inner cell mass will survive. Some will differentiate pre-maturely. Cells that do not differentiate retain the ability to generate any cell type. These become stem cell lines. As the cells grow and crowd the dish, individual cells are removed and placed in a new dish to continue the cell culture. Cells that grow and do not differentiate for at least six months are called a stem cell line. These cells are described as being pluripotent, which means they are able to generate cells of all three embryonic germ layers.

Since 1998, scientists have created about 30-40 stem cell lines for research. These stem cell lines can be maintained for a very long time in the laboratory, and even can be frozen for use at a later date.