Japanese Earthquake and Tsunamis: Before and After 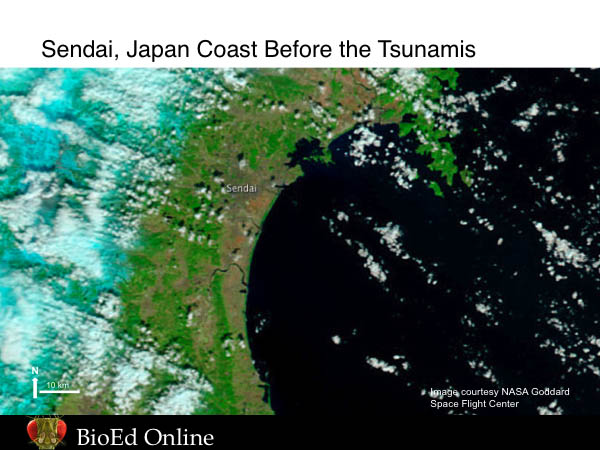 Sendai, Japan Coast Before the Tsunamis

NASA’s Aqua satellite took this image of Japan’s Sendai region on February 26, 2011. The satellite’s MODIS, or Moderate Resolution Imaging Spectroradiometer instrument, used both visible and infrared light to highlight the water/land interface. The false colors used for the image (water appears black or dark blue) make the Sendai coastline clearly visible. Compare this image with the one on the next slide to view the extent of flooding caused by the tsunamis triggered by the March 11 earthquake. Notice the small “north” arrow and map scale on the lower left. Have students hypothesize about which areas of the coastline are most susceptible to tsunamis and explain their reasoning.