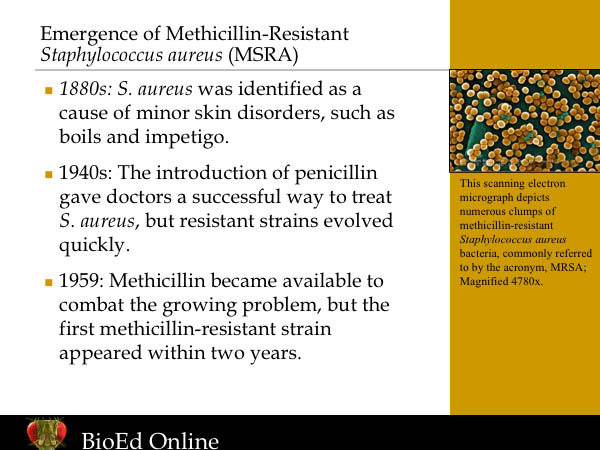 S. aureus was first identified in the 1880s as a cause of boils, impetigo, and other skin disorders. It is among the populations of bacteria normally found on the skin’s surface in humans. The introduction of penicillin in the 1940s gave doctors a successful way to treat these infections, but by the end of that decade, some strains of S. aureus had evolved ways to avoid being destroyed by antibiotics. In other words, these microbes had begun to develop resistance to this antibiotic. Methicillin was introduced in 1959 to combat the growing problem of penicillin–resistance, but British scientists identified the first methicillin-resistant strain (MRSA) only two years later. The first case of MRSA was reported in the United States in 1968.

Saphylococcus aureus gains resistance to antibiotics by a variety of strategies that include acquisition of new plasmids (mobile, circular pieces of DNA); addition of genetic information that is inserted into or rearranged within the chromosome; and spontaneous mutations. In addition bacteria employ several survival strategies to resist the effects of antibiotics. Pumps within the cell membranes of some bacteria can expel an antibiotic before it reaches its intracellular target. A number of bacteria have acquired a genetic change that allows an overproduction of “pumps,” that allow the cell to expel the drug faster than it can enter. Another means of resistance by bacteria is to alter the molecules inside the cell that the drug is designed to target. These changes interfere with a drug’s ability to bind and disrupt cell function. A third method of survival by bacteria is to produce enzymes that inactivate the drug before it can enter or obstruct the cell function.