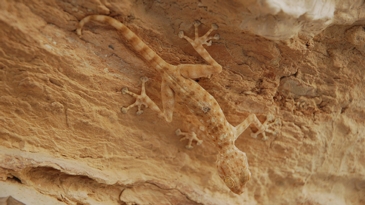 Students explore the differences between mimicry and camouflage, and identify adaptations found in different organisms that illustrate specific survival strategies.

Organisms use many different strategies to avoid predators or to deceive potential prey animals. Some organisms have evolved outer appearances and behaviors that allow them to blend in or match with part of their surroundings. This strategy, known as camouflage, is employed, by many species. The familiar walking stick, for example, has an angular, twig-like appearance and can remain stationary for long periods of time to escape detection by possible predators. Some organisms even change colors to match their environments. The snowshoe hare develops a seasonal white coat in winter to blend in with snow and reverts to a brown coat each spring. The green anole, a tree-dwelling lizard native to the southeastern United States, changes colors from green to yellow to brown depending on its immediate surroundings. Anoles eat small insects, so their coloration makes them almost invisible to their prey and protects them from predators. Other examples of camouflage can be found among beetles, caterpillars, snakes, moths, frogs and grasshoppers.

Another tactic is to mimic or appear similar to another organism or part of an organism. For example, the Viceroy butterfly, which is very tasty to birds, protects itself by mimicking the appearance of the foul-tasting Monarch butterfly. This type of mimicry, where one species mimics another that is distasteful or armed with spines, stingers or toxic chemicals (such as snake venom), was first described by the English naturalist, Henry Walter Bates. Bates studied butterflies in the Amazon during the nineteenth century. Another kind of mimicry involves having one body part that imitates another body part in order to increase survival. Many butterfly and fish species have large eye spots that can be flashed rapidly to surprise a predator. This type of mimicry, sometimes referred to as self-mimicry, also can be used to lure prey. For example, the alligator snapping turtle has a worm-like appendage on its tongue that tempts passing fish to come a little closer.

Organisms and their environment

Based on students’ prior knowledge of animals, have them each create their own animal that relies on either camouflage or mimicry to ensure survival. Then have students present their animals to the class.