What Is a Neuron? 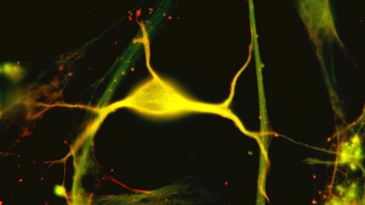 Students build a model neuron and learn how neurons send and receive messages.

The human brain is the most complex structure in the known universe. Consisting of close to 100 billion nerve cells (and many times that number of supporting cells), the brain is the center of our thoughts and emotions. It receives and processes information from the world around us, directs our movements and controls automatic functions of our bodies. Amazingly, virtually all functions of the brain and the rest of the nervous system are based on communication among nerve cells, also known as neurons.

In many ways, a neuron is like any other cell in the body. Each neuron is surrounded by a membrane, is filled with liquid (cytoplasm) and has a nucleus containing its genetic material. However, just as many other cells within the body are specialized to do a particular job, neurons are specialized to receive and transmit information. Even though they may differ in appearance, all neurons collect information from either the environment (information detected by the sensory system) or from other cells in the body. They transmit the information to other neurons and/or other kinds of cells (such as muscle).

A typical neuron has an enlarged area, the cell body, which contains the nucleus. Neurons typically also have two types of specialized extensions that project away from the cell body. The branches on which information is received are known as dendrites. Each neuron usually has many dendrites. Each neuron usually also has a longer taillike structure, or axon, which transmits information to other cells. Axons can be branched at their tips. The axons of many kinds of neurons are surrounded by a fatty, segmented covering called the myelin sheath. This covering acts as a kind of insulation and improves the ability of axons to carry nervous system signals rapidly.

Neurons communicate with one another through special junctions known as synapses. With the most common type of synapse, known as a chemical synapse, neurons do not actually touch. Rather, the end of the axon (or axon terminal) of one neuron is separated from the next neuron by a tiny gap called a synaptic cleft. Messages traveling from one neuron to the next must cross this gap and bind to the next neuron for the signal to continue along its path. Typically, a single neuron may be capable of receiving messages simultaneously on its dendrites and cell body from several thousand different neurons.

This activity provides students with a general introduction to neurons and to their role as message carriers within the body.