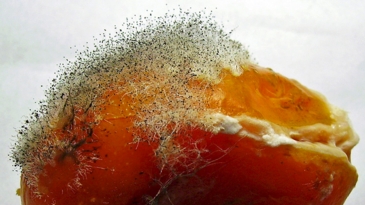 Students grow and observe bread mold and other kinds of common fungi. Student sheets are provided in English and in Spanish.

The old saying “There’s a fungus among us” contains an element of truth. There are at least 100,000 different fungus species, and members of the fungus kingdom (collectively known as fungi) are found almost everywhere. Fungi, along with some bacteria and other organisms, are the decomposers of our world. They break down the remains of dead plants, animals, and other living things and, in the process, obtain the energy they need to grow and reproduce.

Fungi are essential for the continued recycling of nutrients into the soil and the release of carbon dioxide into the air. However, fungi also can be a nuisance to humans. For example, fungi do not discriminate between fruits in a natural setting (such as those that have fallen on the ground) and fruits in the refrigerator. Many fungi attack living organisms and are sources of disease in both plants and animals. Fungi grow especially well in damp places and can attack cloth, paint, paper, leather, cable insulation, and even photographic film. The various fuzzy-looking fungi that grow on damp surfaces often are called molds.

Fungi spread by producing spores—tiny particles that can remain suspended in the air for long periods of time. The powdery appearance and bright colors of many kinds of molds actually are caused by the spores they have produced. Some fungi, such as yeasts, are one-celled organisms. Most, however, consist of mats of slender tubes or hyphae (singular, hypha). In some fungi, the hyphae are loosely packed and easy to see. In others, the hyphae are packed so densely that the structure appears solid. Mushrooms, the spore-producing parts of some fungi, are good examples of structures composed of these tightly packed filaments.

Inside buildings, fungi can grow in damp places, such as basements, shower curtains, food storage areas, and window air-conditioning units. The spores produced by molds can contribute significantly to indoor air pollution and can trigger allergic reactions in some individuals. Fortunately, indoor air pollution from mold spores can be controlled by keeping humidity levels low (below 30%), improving ventilation, and keeping damp areas clean.

Bread mold (Rhizopus stolonifer) is a common fungus that is easy to grow and observe. In this activity, students also may see greenish colonies of penicillium (the fungus that produces the antibiotic, penicillin) and other related fungi.