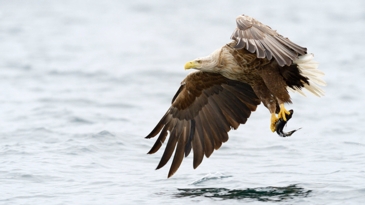 Contaminants in water become concentrated as they are passed up a food chain.
© Andreanita.

Students make a simple model food chain and observe how toxins can accumulate in consumers at the top of the chain. Student sheets are provided in English and in Spanish.

This activity is from The Science of Food Teacher's Guide. Although it is most appropriate for use with students in grades 3–5, the lessons are easily adaptable for other grade levels. The guide is also available in print format.

Many pollutants in the environment become introduced in very small amounts into organisms near the base of the food chain. These pollutants usually are present in the water or the soil in which producers, such as green plants and algae, or primary consumers, such as filter feeders in aquatic ecosystems, live and reproduce. Pesticides that are applied directly to plants can also be introduced into the food chain.

Some chemical substances, such as pesticides and heavy metals (like mercury and lead), persist within the bodies of the organisms that take them in with food. These compounds are not broken down by the body, nor are they eliminated with other waste products. While most of these substances are not harmful in trace amounts, they can accumulate in the tissues of an organism over its lifetime. In addition, consumers near the top of the food chain tend to accumulate larger amounts of toxic substances in their bodies, because the pollutants become more concentrated at each step of the food chain. The actual amounts of toxins accumulated in the bodies of top consumers depend on their food sources and choices.