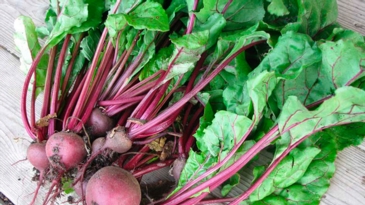 All parts of a beet are edible.
© Savanna Nocks, White Harvest Seed Company.

Students observe and investigate different plant-originated foods and learn about plant parts. Student sheets are provided in English and in Spanish.

This activity is from The Science of Food Teacher's Guide. Although it is most appropriate for use with students in grades 3–5, the lessons are easily adaptable for other grade levels. The guide is also  available in print format.

Green plants and similar organisms produce food for all other living things on Earth. Food provides energy and nutrients for organisms, such as animals, that cannot trap energy from the sun through photosynthesis. Some animals, called primary consumers, eat only plants. Others, known as omnivores, eat plants and animals. Most humans are omnivores. However, some people chose to eat only foods that come from plants. Plant-based foods supply vital nutrients that our bodies cannot make for themselves. These nutrients include vitamins, which are chemicals necessary for the proper functioning of the body; sugars and other carbohydrates, which provide energy; amino acids, which are the building blocks of proteins; oils, another concentrated energy source; and minerals, such as potassium, magnesium, and calcium.

Humans consume a remarkable variety of plants and plant parts. However, agriculture—the cultivation of plants—is a relatively recent innovation in human history. Many historians believe that the farming of plants began about 10,000 years ago in several different parts of the world. The plants we use as food today are very different from their wild ancestors. Most food plants evolved through selection by many generations of farmers to produce larger fruits, grains and other edible parts, and to be easier to plant, harvest and process. The wide variety of foods we eat today originated in many different and geographically separate parts of the world.

Many foods come from plant roots. Important root crops include carrots, parsnips, beets, sweet potatoes, radishes, rutabagas and turnips. Potatoes, which develop underground, technically are stems that are specialized for the storage of starches. Other stems used as food include sugar cane and asparagus.

Leafy foods include chard, spinach, lettuce, brussels sprouts, cabbage, collards and kale. All of these look like leaves. However, foods that come from bulbs, such as onions, leeks and garlic, also are made of leaf parts (the enlarged bases of long, slender leaves). Celery and rhubarb stalks actually are the supporting stems (petioles) of leaves.

Flowers are not eaten frequently, but cauliflower, broccoli and artichokes all are made up of flowers. Fruits and seeds, which develop after flowers are pollinated, are important food sources. Fruits include familiar foods such as oranges, lemons, grapefruit, limes, apples, peaches, pears, grapes, melons, cherries, plums, tomatoes, all squashes, blueberries, green beans and chile peppers. Mangos, bananas, avocados, figs, breadfruit, eggplant, cucumbers, guava, pomegranates, dates, papaya, olives and zucchini also are fruits. As a general rule, keep in mind that anything with seeds is a kind of fruit.

Seeds often contain stored food resources (carbohydrates, oils, proteins) to fuel growth of the tiny plant each contains. Important seeds that we eat are beans, peas, lentils and chickpeas. All of these are members of the bean, or legume, family. Food in these seeds is stored in the fleshy leaves (cotyledons) of the plant embryo. Many nuts consist of seeds or parts of seeds. Examples are walnuts, pecans, almonds and peanuts.

Grains, considered to be among the first cultivated crops, are the small, dry fruits of members of the grass family. Grains look and behave very much like individual seeds. The commonly cultivated food grasses are called cereals, after the Greek goddess Ceres. Major grain crops include barley, millet, oats, rice, rye, sorghum, wheat and corn (maize). Rice, probably the most important grain, is the primary food source for more than 1.6 billion people.