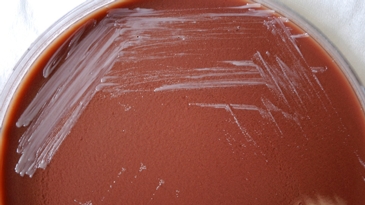 This photo is of Brucella bacteria, which can be found in contaminated milk.
Courtesy of the CDC/Dr. Todd Parker.

Students will grow bacteria collected from a variety of locations and compare the results. Student sheets are provided in English and in Spanish.

This activity is from The Science of Food Teacher's Guide. Although it is most appropriate for use with students in grades 3–5, the lessons are easily adaptable for other grade levels. The guide is also available in print format.

Bacteria are the most numerous of all things living on our planet. However, they are so tiny that it is not possible to see one without the aid of a microscope. Most bacteria must be magnified at least 400 times before they can be observed. Each bacterium (a single bacteria) consists of one cell capable of reproducing very rapidly. In fact, one bacterium cell can produce millions of others in just one day.

Bacteria are essential in many ways. They are important decomposers in almost all ecosystems. Photosynthetic bacteria (also known as blue-green algae) are vital producers in aquatic ecosystems. Bacteria in the intestines of animals help break down some large food molecules during digestion.

Bacteria also can cause serious problems with food. Since bacteria are everywhere, it is easy for food to become contaminated by bacteria and begin to spoil. The slime you see on food that has been in the refrigerator too long is made of clumps of bacteria and, sometimes, fungi as well. Eating spoiled food can make humans and other animals sick.

This activity allows students to observe bacteria and to compare relative amounts of bacteria living in different parts of the home, classroom, or school.