Finding the Carbon in Sugar 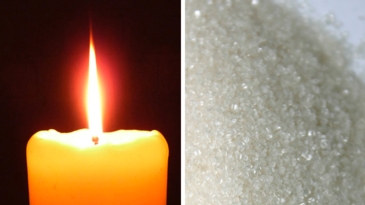 Students learn about combustion and energy by observing (1) a candle burn within a sealed jar, and (2) the burning of white sugar. Student sheets are provided in English and in Spanish.

Most of the fuels we use come from dead plant or animal matter. The origin of fuel wood, of course, is obvious. However, all fossil fuels also are derived from decomposed organisms that have been buried at high temperatures and pressures for millions of years. The energy in these fuels was captured from the sun during photosynthesis by plants, some bacteria, and algae.

When something burns, it combines rapidly with oxygen in a reaction that releases energy. Most of this energy is given off in the forms of light and heat. Other things are given off at the same time. Carbon dioxide, once trapped by green plants during photosynthesis, is formed again and released. Water, also essential for photosynthesis, is released as well. In addition, most fuels produce substances when they are burned, such as smoke, soot, and gases like methane and carbon monoxide. Some fuels, such as natural gas, burn much more cleanly than others, such as coal. However, all fossil fuels release carbon back into the atmosphere during combustion.

Materials per Group of Students or per Student

Session 1: What happens when something burns?