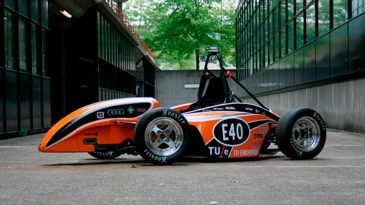 Students learn about Newton’s Three Laws of Motion as they construct and test a lightweight “rocket” car propelled by the action/reaction force of air escaping from an inflated balloon.

All vehicles, whether designed for land, sea, air or space, are governed by the scientific principles stated in Isaac Newton’s Laws of Motion. In brief, the laws are as follow.

An unbalanced force is required to cause an object to change its state of motion or rest. Once in motion, an object will continue moving in a straight line until acted upon by an unbalanced force. Imagine two people pushing on each other. If they are equally strong, neither will move because the opposing forces are balanced. If one person is stronger than the other, the forces are unbalanced and the weaker person will be pushed backward.

Every action is accompanied by an equal and opposite reaction. When force is applied to an object, the object exerts an equal opposing force. Consider what happens when someone fires a shotgun. The pellets fly out of the barrel and the shooter is pushed back by a strong “kick.”

Rockets are an excellent example of the Laws of Motion at work. This activity demonstrates all three laws. Students construct and test a lightweight “rocket” car propelled by the action/reaction force of air escaping from an inflated balloon. The escaping air exerts an unbalanced force on the car, shifting it from a state of rest to a state of motion. The force of the balloon squeezing on air inside accelerates the car when the air is released. Because the car’s mass is very low, it impedes the acceleration minimally. If the car were heavier, it would accelerate more slowly. Finally, the balloon’s wall exerts an action force on the air, causing it to shoot out the nozzle. This creates an equal and opposite reaction force that propels the car. When the balloon’s air runs out, there is no more force to push the car, which coasts until friction brings it to a stop.

Students must answer the following question.

How can a balloon propel a race car?