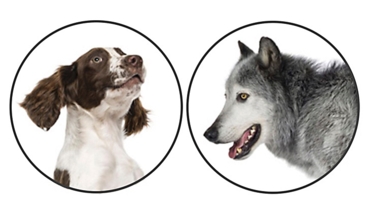 This activity is from the Complex Traits guide for teachers. Lessons are designed for use with students in grades 6-8, but they also may be easily adjusted for use with other grade levels as appropriate.

From the tiny, long-haired Pekingese to the tall, short-haired Great Dane, domestic dogs show immense variety in their sizes, shapes, coat colors and textures, and behaviors. Selective breeding by humans for desirable genetic changes or mutations generated this variability.  Today, more than 400 distinct breeds of dogs are recognized.

Because of its wide range of characteristics, the domestic dog (Canis familiaris) has become an important model for modern genetic studies. However, most of this diversity is found only between dog breeds. The characteristics of individuals within a particular dog breed are very uniform—genetically and in appearance. In other words, dogs are homogeneous in their appearance (phenotype) and genetic makeup (genotype) within breeds, and are phenotypically and genetically heterogeneous among or between breeds. This pattern of variability, in which particular traits are accentuated within breeds, results from inbreeding (breeding of close relatives).

Dogs are members of the Canidae family of mammals. This group also includes coyotes, foxes, jackals, and wolves. The gray wolf is the closest relative of the dog. However, the gray wolf (Canis lupus) does not show the wide range of phenotypic variability found in the dog.

Even though dog breeds appear quite distinct, they still freely interbreed without physical or other barriers. In other words, all domestic dogs are members of the same species. Even with their wide range of appearances, dogs are more similar to one another genetically than they are to grey wolves, their closest relatives.

Experts believe that the domestication and divergence of dogs from wolf populations began about 15,000 years ago. Most modern dog breeds originated within the past few hundred years. Domestication led to selection for and retention of certain favorable traits, such as herding or tracking behaviors, in addition to preferred physical characteristics.

As part of this activity, students examine a diagram that shows the relationships among species in the dog family (Canidae) based on molecular genetic information. It is important to note that diagrams of this type are not family trees or genealogies. Instead, they represent similarities or differences among living (extant) groups based on their genetic information. Groups that are found on the same branches (or clades) of the tree share unique genetic information and are descendants of the same founding or ancestral population.

This type of diagram, in which groups are defined by shared inherited characteristics, usually is called a phylogeny or phylogenetic tree. The term phylogeny comes from the Greek words, phylon (tribe or clan) and genesis (origin).

Download the PDF for an Answer Key, Extensions, Student Pages and additional information.