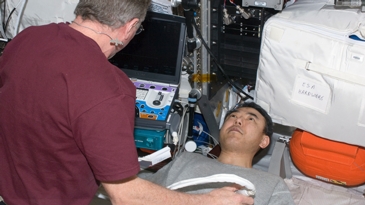 Students use water balloons to simulate and investigate the effects of gravity and microgravity on the distribution of fluid in the body. If completing all activities in The Science of the Heart and Circulation, conduct the post-assessment at the conclusion of this activity.

This activity is from The Science of the Heart and Circulation Teacher's Guide, and was designed for students in grades 6–8. Lessons from the guide may be used with other grade levels as deemed appropriate.

If students have been reading the Astroblogs, they already know quite a lot about the challenges faced by the circulatory system when humans travel into a microgravity environment. Living in microgravity changes both the heart and the blood.

On Earth, blood is pulled downward by gravity and tends to pool in the lower half of the body. In microgravity, blood is no longer pulled toward the feet, or in any particular direction. Without the effects of gravity, the distribution of blood in the body changes, with less blood than normal in the legs and more blood than normal in the upper body. Therefore, astronauts in space get skinny “chicken legs” and puffy faces, and often feel stuffiness in their ears and noses. Suddenly, the heart is not moving five liters of blood (the amount in most adults) against the strong pull of gravity. Because it does not have to work as hard, the heart becomes slightly smaller and weaker while in space.

In microgravity, the body senses the extra blood in the upper body and interprets it as too much fluid (over-hydration). This signals the kidneys to remove water from the blood and dispose of it as urine. Astronauts lose as much as 20% of their blood volume during a space mission. Other sensors in the body then discern that there are too many red blood cells for the amount of blood circulating, so the body reduces the amount of red blood cells to match the plasma. This reduction in red blood cells is called “space anemia.” After only one day in space or in orbit, astronauts have a lower blood volume. However, their ratio of red blood cells to plasma is similar to that experienced on Earth.

The cardiovascular system adapts well to microgravity, but what happens when an astronaut returns to Earth and “normal” gravity? By the time a spacecraft or orbiter begins reentry into the Earth’s atmosphere, astronauts have fewer red blood cells, their hearts have not been working as hard as they do in normal gravity, and their blood volume is lower than normal. These changes occurred over several days (or even longer), but reentry into normal Earth gravity happens quickly. This abrupt change creates important challenges for the circulatory system. And it can be dangerous for astronauts, because they must function effectively during reentry and landing.

In the activity, "What Is Blood Pressure?" students learned about high and low blood pressure (hypertension and hypotension, respectively). One consequence of low blood pressure is reduced blood flow to the brain. Upon returning to Earth’s gravity, astronauts sometimes experience a specific type of low blood pressure, called orthostatic hypotension, which you also may have experienced if you’ve ever stood up quickly after being seated on a chair. You get a little dizzy because gravity pulls the blood in your body down toward your feet. For a moment, your blood pressure falls slightly, and you feel dizzy. The dizziness goes away as your heart speeds up and stroke volume increases.

This same experience of orthostatic hypotension can happen to astronauts returning from space. Upon reentry, the pull of the gravity increases and blood is pulled back toward the lower body, as it is on Earth. However, since an astronaut’s total blood volume has decreased while in space, the effect is quite a bit stronger than when a person stands up from a chair. Astronauts can become very dizzy, or even lose consciousness during reentry. This condition can last for several days after returning to Earth, until the changes in the astronaut’s circulatory system reverse themselves and the body’s overall blood volume returns to a normal level. Scientists are working to develop short-acting medications to help prevent the effects of orthostatic hypotension and allow astronauts to function normally during landings.

Many biomedical researchers and astronauts also are conducting experiments to determine the impacts of longer-term spaceflight on astronauts’ circulatory systems. For example, would an exercise routine be sufficient to prevent long-term changes in heart strength and size, blood volume, and the number of circulating red blood cells? Researchers are working to answer these questions. Their work also may produce better treatments for people on Earth who are bedridden for long periods of time, or who have diseases of the heart or circulatory system.

Download color images from The Science of the Heart and Circulation Teacher's Guide.