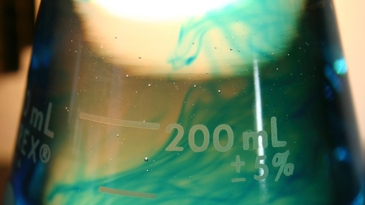 Liquids move and disperse when added to other liquids.
© Baylor College of Medicine\JP Denk.

Students investigate and draw conclusions about the movement of dissolved substances, and about the importance of organisms’ internal transport systems.

This activity is from The Science of the Heart and Circulation Teacher's Guide, and was designed for students in grades 6–8. Lessons from the guide may be used with other grade levels as deemed appropriate.

Have you ever made lemonade and forgotten to stir the mixture? The sweetener and flavoring eventually become distributed within the liquid, but the process, called diffusion, takes time. Diffusion is the random movement of molecules or particles in solution. They bounce against each other, generally moving from regions of higher concentration (where there is more of the dissolved substance) to regions of lower concentration (where there is less of the dissolved substance). Eventually, the mixture becomes evenly distributed. This is the process by which the sweetener and lemonade flavoring become dispersed in the water, even if you don’t stir the mixture.

What happens in large organisms, such as humans, that consist of many millions of cells? These organisms’ cells are bathed in water, but the cells often are far away from the external environment. Diffusion is not sufficient to provide needed nutrients or to remove waste from distant cells. In addition, most larger, complex organisms carry out important tasks—obtaining nutrients, exchanging gases, removing wastes, etc.—in specialized regions of their bodies (such as the lungs or kidneys in humans). Consequently, most multicellular organisms have specialized systems (such as the circulatory system) to transport nutrients, waste and other materials from one region of the body to another. This activity allows students to investigate the process of diffusion and to consider why many organisms have internal transport systems.

Materials per Group of Students (see Setup below)

Download color images from The Science of the Heart and Circulation Teacher's Guide.