Muscles and Bones in Space 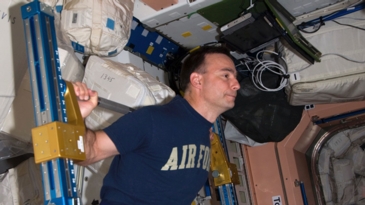 Astronauts must exercise at least two hours every day while aboard the ISS.
Courtesy of NASA.

Students learn how human muscles and bones change during space missions, and devise preventative solutions to help limit those changes.

This activity is from The Science of Muscles and Bones Teacher's Guide, and was designed for students in grades 6–8. Lessons from the guide may be used with other grade levels as deemed appropriate.

On Earth, muscles and bones are used to working against gravity to maintain posture and balance. In space, where the effects of gravity are almost absent, the muscles and bones of astronauts do not have to work as hard and become weaker. Bone rebuilding falls behind bone dismantling, and bones decrease in diameter and become less dense. The calcium removed from bones is permanently eliminated from the body in urine, leading to a condition similar to osteoporosis on Earth.

Muscles in space also become smaller and weaker through a process called atrophy. In addition, the fibers inside muscles change because most work in space involves short-duration, high intensity tasks.

The adaptation of muscles and bones to microgravity conditions does not have serious consequences in space, where astronauts do not need as much strength to keep their balance and move about. In fact, the bodies of people in space eventually reach equilibrium, called “space normal,” with their new environment. This adaptation does, however, cause problems when astronauts return to an environment with the full force of gravity because their muscles and bones have become too weak to function as before.

Similar problems can be observed on Earth among people who are bedridden during a long illness, who have part of their bodies immobilized to allow a fracture to heal or who suffer from osteoporosis. Research to develop measures that will counter changes in muscles and bones in space will benefit these and many other people directly.

Download color images from The Science of Muscles and Bones Teacher's Guide.