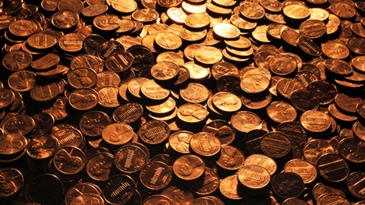 Students read an essay, "It's All in the Numbers," about the rapid spread of HIV particles in the body, and learn how to calculate exponential growth using pennies to model HIV particles.

Under favorable conditions and with sufficient time and resources, populations of all organisms, including infectious agents like viruses, have the potential to increase dramatically over time. Even slow-growing organisms can reach astounding population sizes if reproduction is unchecked. Charles Darwin used elephants, which breed very slowly, as a hypothetical example. Beginning with two elephants, which generally produce only six offspring during a reproductive span of 60 years, an elephant population would number only 54 individuals after 200 years. However, after 1,000 years, the population would have grown to 86,000,000 elephants!

Now consider another example, in which a parent cell divides into two daughter cells every 10 minutes. After 10 minutes, there would be two cells; after 20 minutes, four cells; after 30 minutes, eight cells, and so on. After three hours, there would be close to one million cells. When quantity increases by a fixed percentage at regular time intervals, we have what is referred to as exponential growth. On a graph, exponential growth is represented by an upward curve, not a straight line. In addition to the example of cell division, exponential growth can be observed in the accumulation of compound interest, and in the increasing levels of CO2 in the atmosphere. Untreated, HIV also is capable of exponential growth once it begins to replicate and spread within the human body.

Depending upon students' grade and maturity levels, the essay, "It's All In the Numbers," may be used as teacher background information or as a student reading assignment. It is especially effective when read aloud.