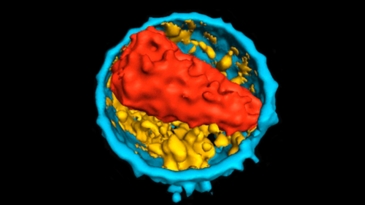 Students read an essay, "Portrait of a Killer," about the emergence of HIV/AIDS, and learn about the basic structure of the virus by making three-dimensional paper models of an HIV particle.

The activity is comprised of two parts. The first is an essay which tells of how HIV/AIDS was first recognized among physicians. The second is an activity that helps students visualize the Human Immunodeficiency Virus (HIV) by having them construct 3D HIV particle models from paper. The model to be used represents a complete viral particle. It is a 20-sided polyhedron, called anicosahedron, which approximates the shape of the virus. The completed, three-piece model is about 500,000 times larger than an actual HIV virus particle. Students will combine their finished models into one mass in a first step toward estimating how many HIV particles could be contained inside a white blood cell before being released into the blood stream to attack new cells.

Depending upon students' grade and maturity levels, the essay, "Portrait of a Killer," may be used as teacher background information or as a student reading assignment. It is especially effective when read aloud.