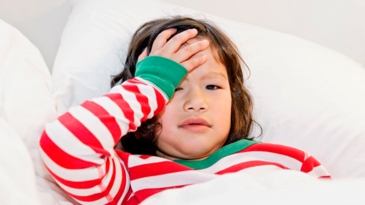 Students use evidence to determine whether a patient has a cold, flu or strep infection, and they also learn the differences between bacterial and viral infections.

This activity is from The Science of Microbes Teacher's Guide, and is most appropriate for use with students in grades 6-8. Lessons from the guide may be used with other grade levels as deemed appropriate.

Many different microorganisms can infect the human respiratory system, causing symptoms such as fever, runny nose or sore throat. Even the common cold, which may range from mild to serious, can be caused by any of more than 200 viruses! Colds are among the leading causes of visits to physicians in the United States, and the Centers for Disease Control and Prevention (CDC) report that 22 million school days are lost in the U.S. each year due to the common cold. Usually, cold symptoms appear within two to three days of infection and include: mucus buildup in the nose, swelling of sinuses, cough, headache, sore throat, sneezing and mild fever (particularly in infants and young children). The body’s immune system, which protects against disease-causing microbes, almost always is able to eliminate the viruses responsible for a cold.

Flu (or influenza) often is more serious than the common cold. Caused by one of three types of closely related viruses, flu can come on quickly, with chills, fatigue, headache and body aches. A high fever and severe cough may develop. Flu may be prevented in some cases through a vaccine. However, since the viruses that cause flu change slightly from year to year, a new vaccine is required each flu season. Influenza was responsible for three pandemics (worldwide spread of disease) in the 20th Century alone.

Antibiotics do not kill viruses, and therefore, are not helpful in fighting the common cold or flu. But these diseases can make a person more susceptible to bacterial infections, such as strep throat, a common infection by a Streptococcus bacterium. Symptoms of “strep” infections include sore throat, high fever, coughing, and swollen lymph nodes and tonsils. Diagnosis should be based on the results of a throat swab, which is cultured, and/or a rapid antigen test, which detects foreign substances, known as antigens, in the throat. Strep infections usually can be treated effectively with antibiotics. Without treatment, strep throat can lead to other serious illnesses, such as scarlet fever and rheumatic fever.

Symptoms similar to those of a cold can be caused by allergens in the air. Health experts estimate that 35 million Americans suffer from respiratory allergies, such as hay fever (pollen allergy). An allergy is a reaction of an individual’s disease defense system (immune system) to a substance that does not bother most people. Allergies are not contagious.