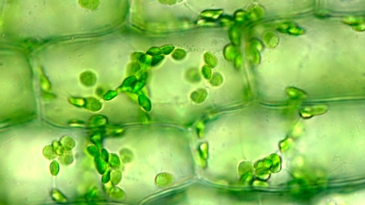 Students make slides of cells from an onion skin and an Elodea leaf to observe under a microscope, and learn that all organisms are composed of cells.

This activity is from The Science of Microbes Teacher's Guide, and is most appropriate for use with students in grades 6–8. Lessons from the guide may be used with other grade levels as deemed appropriate.

Every living thing is composed of cells, the microscopic building blocks of life. In fact, most life forms exist as single cells that carry out all functions needed for their own independent existence. Examples of common single-celled organisms are bacteria (tiny organisms found in almost every habitat on Earth), diatoms (algae that are common components of phytoplankton), and yeast (a kind of fungus). Multicellular organisms consist of several to many cells. Single-celled and small multicellular organisms, which must be magnified to be observed, are called microbes or microorganisms.

This activity uses plant cells, because many of these are relatively easy to see. Students will observe onion cells (in the thin membrane around each onion “ring”) and a leaf from Elodea. With these examples, students will be able to see basic parts of cells, including the nucleus (structure in the center of the cell that holds hereditary information), cytoplasm (gel that fills the cell), cell wall (rigid outer boundary of plant and other kinds of cells), and chloroplasts (large green structures in which photosynthesis occurs).