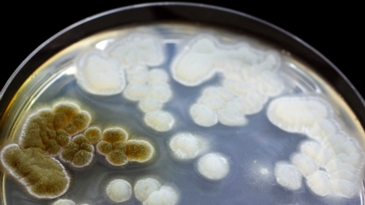 Students grow, observe and compare bacteria and/or fungi in petri dishes, learning that microbes are everywhere and can grow rapidly on sources of food and water.

This activity is from The Science of Microbes Teacher's Guide, and is most appropriate for use with students in grades 6-8. Lessons from the guide may be used with other grade levels as deemed appropriate.

Microbes grow and reproduce in habitats where no other organisms can survive. They can be found in hot springs and deep underground veins of water, in volcanic rock beneath the ocean floor, in extremely salty water in the Great Salt Lake and the Dead Sea, and below the ice of Antarctica. Not even radiation or high levels of deadly chemicals, such as lead or sulphur, can kill the hardiest of microbes, referred to by scientists as “extremophiles.” Most extremophiles are single-celled organisms similar to bacteria, called Archaea. Many classifications place Archaea (or archaebacteria) in their own kingdom or domain, instead of with bacteria.

Microbes also are found in more mundane places, such as on our hands, in the air and in soil. This activity is designed to help students understand the diversity of microorganisms present in our immediate surroundings and on our bodies. It also will teach students how to limit the spread of disease-causing microbes. In addition, students will observe examples of bacteria and fungi.

Bacteria are the most numerous living things on Earth. Each bacterium consists of a tiny cell that must be magnified at least 400 times to be visible. Even though individual cells are not visible without the aid of a microscope, bacterial colonies (clumps of bacteria) grow large enough to be seen clearly.

Yeasts are fungi. They are small, single-celled organisms that can reproduce asexually by producing buds. They are known for their ability to obtain energy from food sources through a process known as fermentation. Fermentation yields alcohol and carbon dioxide gas as byproducts. It is used in the production of alcoholic beverages, such as beer and wine, and in making bread and other baked goods.

Molds, which also are fungi, consist of long, tangled filaments. Hair-like masses of molds often contaminate bread and cheese. They also are important, but usually unnoticed components of soil.

In some instances, infections by bacteria or fungi can cause disease. Contamination by these organisms also can make food unsafe to eat. The slime found on food that has been in the refrigerator too long is made of clumps of bacteria and sometimes fungi. Eating spoiled food can make humans and other animals sick.

Bacteria can be transferred to food when people do not wash their hands after using the restroom, changing diapers or playing with a pet. Some foods, especially meats and poultry, can have bacteria on their surfaces that can be transferred to other foods if utensils and cutting boards are not washed with soap and hot water after each use.

In the laboratory, bacteria are grown on substances called culture media. The medium usually contains an energy source, such as a sugar dissolved in water, plus other nutrients, such as nitrogen. Culture media can be in liquid form (usually called a broth) or gelatin-like (called a gel).

In this activity, students will grow microbes on a semisolid gel refined from algae, a medium often referred to as nutrient agar.