The Variety and Roles of Microbes 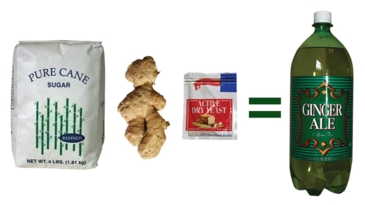 Students use sets of cards to categorize microbes’ roles and uses and learn that some microbes can share characteristics with more than one group.

This activity is from The Science of Microbes Teacher's Guide and is most appropriate for use with students in grades 6–8. Lessons from the guide may be used with other grade levels as deemed appropriate.

Microbes live almost everywhere on Earth—including within and on other living organisms. They can be found in almost all climates, from extreme heat to freezing cold. Some microbes can make us sick, but only a very small percentage actually cause disease. In fact, many microbes—including most bacteria—are helpful. Much of the oxygen released into the atmosphere through photosynthesis comes from algae and blue-green bacteria. Many fungi and bacteria are essential for cycling nutrients in ecosystems and for acting as decomposers, breaking down dead organisms and the waste of living things.

We depend on microbes for food. What would a hamburger be without a bun, cheese, and pickles (all of which are produced with direct assistance from microbes)? The cattle used for beef also rely on microbes to digest the tough grasses they eat. In our own intestines, microbes aid in digestion, make several essential vitamins, and help prevent disease.

This activity focuses on the diverse array of microbes and the functions they perform. Three kingdoms within the five-kingdoms system of classification are included here: Monera (bacteria), Protista (algae and protozoans), and Fungi (mushrooms, yeast, and mold). The two kingdoms not considered to have single-celled, free-living individuals are plants (Plantae) and animals (Animalia). Many scientists now favor a three-domain classification system: Bacteria, Archaea, and Eukarya.

Viruses represent a special case within the groups of microbes. They do not have all of the structures necessary for independent life. They must invade and use living cells to reproduce. For this reason, many biologists do not consider viruses to be “living” organisms and do not assign them to a kingdom or domain.

Per Group of Students