In the United States, a political debate is raging about whether or not to expand federal funding for embryonic stem cell research. Current policy only allows federal monies to be used for research on 21 stem cell lines that existed before 2001. Legislation currently being discussed would allow funding for research on new stem cell lines derived from surplus embryos from fertility clinics. These clinics serve many of the 10% of couples in the US who are unfertile. Some couples seek to conceive children through in vitro fertilization, a process in which eggs from the woman are extracted and are mixed in a Petri dish (or equivalent) with sperm taken from the man. The resulting embryos are implanted back into the woman's uterus so that they can develop. During this process, more embryos are created than are needed. Some estimates suggest that more than 400,000 frozen embryos currently are in storage in fertility clinics in the US. 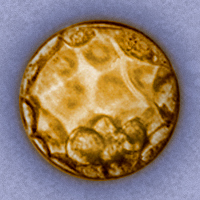 To understand the stem cell debate, it is important to know what stem cells are and the types of research for which they are used. Stem cells are unspecialized cells that can self-renew (or "proliferate") for extended periods of time without differentiating (giving rise to other kinds of cells). They exhibit a stable, normal chromosome complement. Stem cells cannot perform any specialized functions but have the potential to generate cells with specialized functions (a process known as "differentiation"), such as pulsating heart muscle cells or defensive immune cells.

Stem cells are present in the earliest stages of the development of an embryo. Embryos develop from a fertilized egg, which is a single cell formed by the union of the nuclei from a sperm and an egg. The fertilized egg is said to be "totipotent," meaning that it has the potential to generate all the specialized cells and tissues of the body, as well as the tissues for its (the egg's) development in the uterus.

The DNA within the fertilized egg instructs the cell to divide (usually 24–36 hours after fertilization). The cell divides into two cells, and then each cell divides again, producing four cells. This process continues for five to six days. At that point, the single cell has become a hollow ball of cells, called a blastocyst, that has not attached to the uterus. All mammals produce a blastocyst during embryogenesis (the developmental process that begins once the egg is fertilized).The blastocyst is composed of two distinct cell types: 1) cells that will become the placenta; and 2) the inner cell mass. The inner mass of cells is stem cells. These unique cells are described as "pluripotent," because they retain the ability to read all information contained in the DNA within their nuclei. Cells in the inner cell mass of the blastocyst also have the capacity to generate cells that develop into all of the tissues of the body.

A very specific and important event occurs after 5–6 days: the blastocyst changes very subtly and the cells in the inner cell mass lose the ability to read all of their DNA. In other words, cells are no longer pluripotent after this point in development.

Scientists can remove the inner cell mass of a blastocyst by microsurgery or immunosurgery (use of antibodies). The harvested cells are transferred to a Petri dish containing a specialized nutrient broth, known as a culture medium. After 9–15 days, when clumps of cells have formed, cells from the periphery are separated and replated in the same type of culture medium. Not all the cells of the inner cell mass will survive. Some will differentiate prematurely. Cells that do not differentiate, however, retain the ability to generate any cell type. As the cells grow and crowd the dish, individual cells are removed and placed in a new dish to continue the cell culture. Cells that grow and do not differentiate for at least six months are called a stem cell line. These cells are described as being pluripotent, which means they are able to generate cells of any tissue in the body.

Stem cell cultures grown in the laboratory may be used to generate specialized, differentiated cells. The most common method of inducing embryonic stem cells to differentiate is to introduce growth factors or change the chemical composition of the surface on which they grow. For example, if the growth surface medium is treated in such a way that the cells cannot adhere to it, the cells float and begin to interact with each other. This cell-to-cell interaction, when combined with the introduction of specific growth factors (in vitro), can induce cells to differentiate along a specific pathway.

In 1998, developmental biologist James Thomson at the University of Wisconsin-Madison was the first scientist to keep human embryonic stem cells alive in the laboratory. Before this, scientists could harvest the inner cell mass of the blastocyst, but were able to keep the cells alive only for a very short time.

There are some cells in the bodies of adults than can differentiate into other kinds of cells. These cells, called adult stem cells, are found in tissues such as brain, bone marrow, skin, liver, skeletal muscle and peripheral blood vessels. It is suggested that some of these cells may be able to differentiate into multiple cell types (called "plasticity" or "trans-differentiation"). For example, brain stem cells may be able to generate blood and skeletal muscle cells. However, stem cells in adult tissues appear to have a more limited capacity or potential to differentiate than do embryonic stem cells.