A recent study by the Centers for Disease Control and Prevention (CDC) estimated that 3.2 million girls (approximately one in four) between the ages of 14 and 19 in the US are infected with at least one sexually transmitted disease (STD). The study examined the prevalence of human papillomavirus (HPV), chlamydia, herpes simplex virus, and trichomoniasis, but it did not test for human immunodeficiency virus (HIV), which causes acquired immunodeficiency disorder (AIDS). Other study findings, however, indicate that young people in the US continue to be at risk for HIV infection. For example, approximately 4,800 young adults were diagnosed with HIV infection or AIDS in 2004.

There are more than 20 types of known sexually transmitted diseases. These illnesses pass from one person to another, primarily through sexual contact, and can be caused by bacterial, parasitic or viral infection. The spread of many of STD-causing microorganisms can be prevented by the avoidance of sexual activity, or reduced by the proper use of latex (or polyurethane) condoms for all sexual contact. Prompt screening for and treatment of common STDs, such as chlamydia, also reduces the risk of spreading or contracting a more serious infection, such as by HIV. Some of the more common STDs are described below.

Chlamydia, the most commonly reported bacterium-related STD in the US, is caused by the bacterium, Chlamydia trachomatis. An estimated 2.8 million Americans are infected with chlamydia each year, but many do not seek treatment because the symptoms often are mild or absent. The highest rates of infection are among adolescents between 15 and 19 years of age. Chlamydia can spread during any kind of sexual contact; the risk of infection can be reduced by correct use of latex (or polyurethane) condoms. Even though initial symptoms may be negligible, the infection is particularly dangerous to women, because it can damage a woman's reproductive organs and cause serious problems, such as infertility, ectopic (outside the uterus) pregnancy and recurrent pelvic pain. Chlamydia can be treated and cured effectively with antibiotics.

Gonorrhea is an infection of the reproductive tract, mouth or anus caused by the bacterium, Neisseria gonorrhoeae. More than 700,000 persons in the US are infected with gonorrhea each year. Gonorrhea is spread through sexual contact. Several antibiotics can be used to cure this infection, but drug-resistant strains of gonorrhea are becoming more prevalent in many parts of the world. Correct use of latex (or polyurethane) condoms reduces the risk of contracting gonorrhea.

Hepatitis B is one of several kinds of liver disease caused by a virus. Hepatitis B virus (HBV) causes livelong infection, scarring of the liver, liver cancer and liver failure. It is spread by direct contact with blood from an infected person, such from sharing needles or unprotected sex. Latex condoms might help to reduce the risk of contracting HBV. A vaccine is available for Hepatitis B. 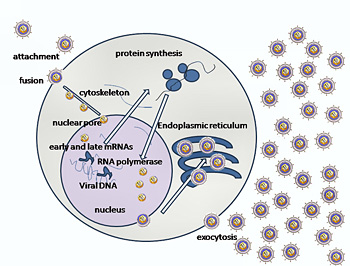 Herpes is caused by the Herpes simplex virus (HSV). Herpes infections around the mouth (cold sores) usually are caused by a strain of the virus called HSV type 1. Another variant of the virus, HSV 2 typically infects the genitals and anal area. HSV can be transmitted through any kind of sexual contact, including oral sex, and can spread even when sores are not present. Once a person is infected, the virus will remain in certain nerve cells of the body for life. There is no cure for herpes, but some antiviral medications can shorten or prevent outbreaks. Condom (latex or polyurethane) use reduces, but does not eliminate the risk of contracting HSV.

HIV/AIDS refers to infection by the human immunodeficiency virus, which destroys the body's ability to fight infections and cancers. HIV can be transmitted through any close contact with body fluids, such as blood or semen, of anyone who has the virus. It also can be transmitted from HIV-infected mothers to their children. Transmission most frequently occurs during unprotected sexual acts or when sharing needles to inject intravenous drugs. An existing infection with another STD increases the risk of contracting HIV, because the HIV virus can invade the body through tiny sores caused by the other STD. Appropriate use of latex (or polyurethane) condoms reduces the risk of contracting or spreading HIV through sexual activity. According to the National Institutes of Health, "there is no evidence that HIV is spread by contact with saliva or through casual contact, such as shaking hands or hugging, or the sharing of food utensils, towels and bedding, swimming pools, telephones, or toilet seats. HIV is not spread by biting insects such as mosquitoes or bedbugs." The first signs of HIV infection generally occur a month of two after infection, and may be similar to symptoms of flu. Severe symptoms may not appear until many months or years later. More advanced stages of HIV infection—during which people are susceptible to many life-threatening diseases, including some forms of cancer—are referred to as acquired immunodeficiency syndrome (AIDS). Treatments now exist to fight HIV infection, but the virus always is deadly. HIV infection can be detected with a blood test. 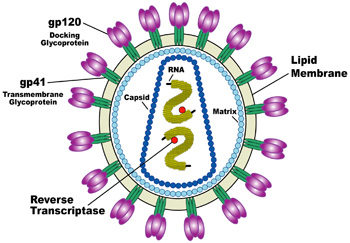 Organization of the HIV-1 Viron
Image Credit: US National Institute of Health

Human papillamoviruses (HPV) are common viruses that cause warts. About 30 types of HPV are transmitted sexually, and as many as 24 million Americans are infected. HPV infection often is symptomless and may clear on its own. Low-risk forms of HPV cause genital warts. Infection with high-risk forms of HPV, however, can lead to cancers, particularly of reproductive organs. Some forms of HPV are linked specifically to the development of cervical cancers in women. Precancerous changes in the cervix can be detected by a Pap smear (a simple test performed in a doctor's office). A new vaccine, Gardasil, protects against four types of HPV that collectively cause 70% of HPV-related cervical cancers and 90% of genital warts. Correct use of latex (or polyurethane) condoms reduces, but does not eliminate, the risk of contracting or spreading HPV infection.

Syphilis is a sexually transmitted illness caused by the bacterium, Treponema pallidum. An ancient disease, syphilis is again increasing in the United States. The bacterium causing syphilis is passed from person to person through direct contact with a syphilis sore. The initial symptom usually is a painless, open sore, usually on or near the genitals. If untreated, syphilis may go on to affect the nervous system, heart, blood vessels, liver, bones and joints. Syphilis sores also make it easier for infected persons to transmit or acquire HIV during sexual activity. When caught early, syphilis is treatable with antibiotics. Correct use of latex (or polyurethane) condoms reduces the risk of spreading or catching syphilis.

Trichomoniasis is caused by a single-celled parasite belonging to the protozoan group. It is the most common, curable STD in young, sexually active women. This disease also affects men, but the symptoms (irritation and yellowish discharge) are more common in women. Trichomoniasis usually can be cured with a prescription antibiotic. The use of latex condoms reduces, but does not eliminate, the risk of transmission.