The “Cinnamon Challenge” is a social phenomenon, spread largely through social media, which carries serious risks probably not envisioned by its creators. The Challenge is straightforward: try to swallow a tablespoon of ground cinnamon in 60 seconds without drinking water. It sounds simple, but cinnamon powder dries the mouth almost instantly, and the potent spice triggers a severe gag reflex, coughing and choking. Many videos of suffering participants have been posted on YouTube and shared via social media.[1]

Data on Google searches for the phrase, “cinnamon challenge,” illustrate the trend. The number of searches rose rapidly in late 2011, and peaked in February 2012. A second, less dramatic peak occurred between January and May 2013, as information and stories about the challenge continued to spread.[2] 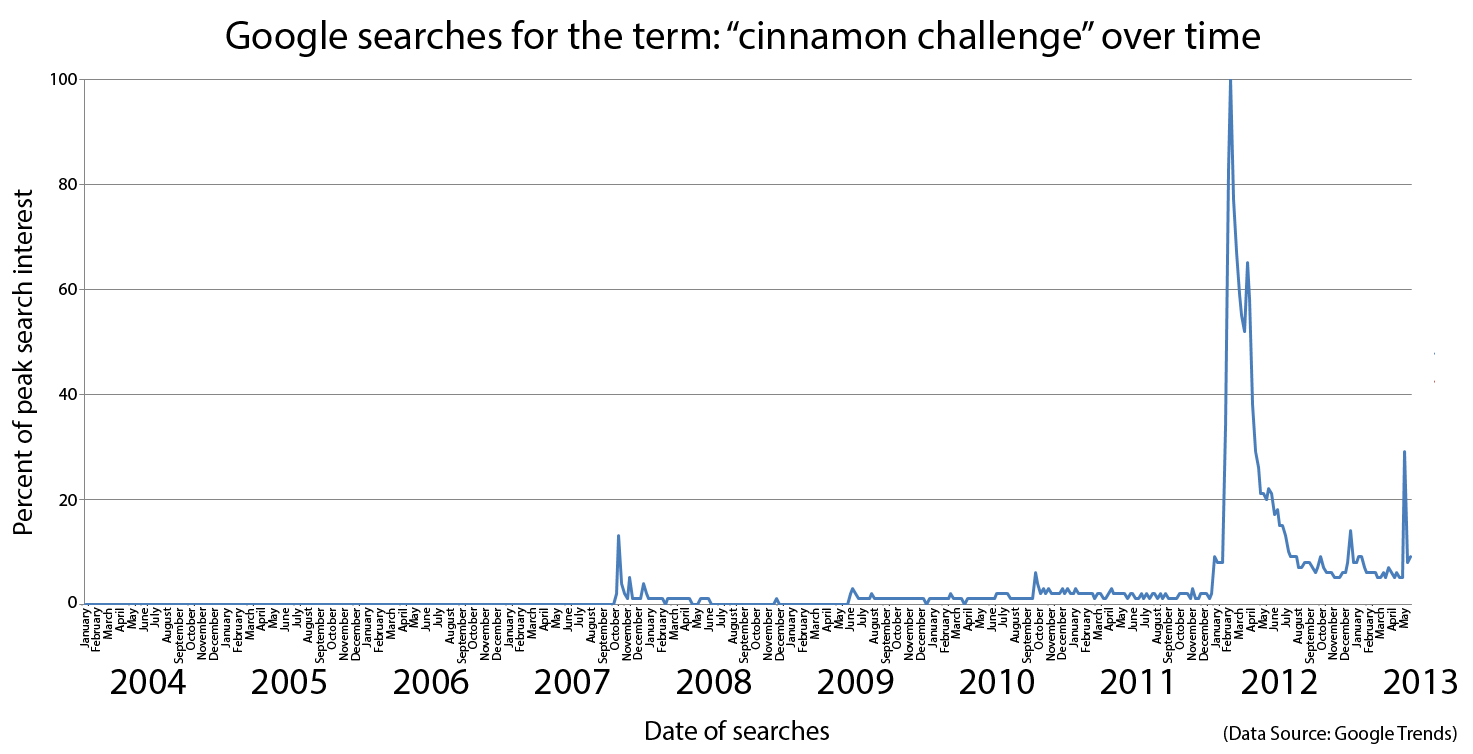 Data from the American Association of Poison Control Centers (AAPCC), which maintains the only poison information and surveillance database in the United States, mirrors the Google search trends. In 2011, the AAPCC reported 51 calls to poison centers involving misuse or abuse of cinnamon by teens aged 13 to 19.[3] There were 222 such reports in 2012, and 20 in the first three months of 2013. [4] Some of the calls to the AAPCC required medical attention.

In addition to discomfort and irritation, the “Cinnamon Challenge” poses potentially serious health risks, including pneumonia. The greatest danger is the potential for aspirating cellulose fibers in the cinnamon powder.[5] These fibers are bioresistant and biopersistant, meaning that they do not dissolve or biodegrade in the lungs. Studies involving rats indicate that cellulose fibers can damage the lungs and remain present in the lungs for a year or more after exposure.[6][7]

There are no formal studies on the effects of inhaled cinnamon in humans, but individual cases indicate the risk. At least one teen was hospitalized for a collapsed lung after attempting the “Cinnamon Challenge,” and at least 30 teens required medical attention.[8] Not surprisingly, people with asthma or other broncho-pulmonary diseases, or allergies to cinnamon are at greater risk. For such individuals, the Challenge could prove fatal.

There is only limited research about how social media can propagate risky behaviors, but the effect of social influence on individuals is well established[9]. At minimum, the “Cinnamon Challenge” demonstrates the power of social media to spread a cultural phenomenon quickly among teenagers, and even politicians, comedians, NBA players, and the MythBusters TV program.[10][11][12][13] The Challenge also illustrates the remarkable willingness of people to accept entirely avoidable risk, even though there is no apparent benefit.